Our Journey Through the Metaverse 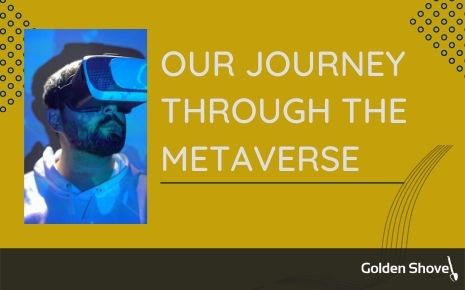 It was the summer of 2015 and it was a beautiful day for a work retreat. The Golden Shovel team had gotten together at a cabin to discuss business and socialize on the lake. Being a technology company, I brought cardboard VR headsets for everyone as a novelty to experience VR by putting their cellphones into the contraptions.  We watched a 360 video and rode a rollercoaster. It was exciting, new, and scrappy back then, but it also seeded the ‘Ah-ha! moment’ of the technology’s potential.

Fast forward to 2017 when Golden Shovel unveiled the PlaceVR brand and its first few projects at the International Economic Development Council’s Annual Conference in Toronto. The headset and camera technology had advanced enough to be able to get a quality viewing experience, but the hardware was cumbersome having to be tethered to computers and game consoles. The following year Oculus began producing wireless headsets that were much more portable and it was ‘game on’ for use by economic developers. With the new headsets, business and talent prospects could experience the feeling of visiting a place without physically being there.

With the new headsets, a variety of new apps that allowed multiple people to participate together socially were unveiled. We experimented with them heavily, discovering ways we may be able to use them for our economic development work. They were over-featured for our needs with a focus on gaming and socializing, so we began the development of our own app. The goal of PlaceVR Meetings was to create the easiest possible way for an economic developer to give a familiarization tour or site tour to prospects virtually “in person”. We unveiled it to clients in the fall of 2021. A month later, Facebook’s CEO Mark Zuckerberg announced he was changing the name of his company to ‘Meta’ and presented a movie-length vision for the Metaverse which they would focus on creating. Overnight, ‘metaverse’ became the hottest word in tech.

By definition, the Metaverse is a virtual-reality space in which users can interact with a computer-generated environment and other users. The terms 'Metaverse' and 'Avatar' were first coined in the book 'Snow Crash', a novel by Neal Stephenson that came out in 1992. The general idea is that there is a virtual world where we can communicate with each other from anywhere in the world as if we were right next to each other. The ‘virtual world’  will be accessed through different types of hardware. VR goggles, like the Oculus Quest 2, where users are fully immersed in the experience; Augmented Reality headsets, like Microsoft’s holo-lens, that combine the natural environment with virtual objects and people; Or through traditional computers and smartphone screens, usually with a ‘third-person’ feel to it like many video games today. The Metaverse will be a place where people can find entertainment, social experiences and conduct business of all types, including economic development.

The Metaverse is BIG Business

The latest hype is not without precedent. The technology stack that has come together to make the Metaverse a reality is being developed by many of the biggest companies in the world. There is hardware being developed by the likes of Meta, Apple, Google, Microsoft, and many more. There is software and content being developed across the globe creating the experiences, content, and virtual worlds that we will interact with plus a variety of other technologies including 5G, blockchain, NFTs, cryptocurrency, and edge computing that creates the perfect storm for its success. Retailers from Samsung to Disney are buying ‘virtual real estate’ sometimes in the millions of dollars to have a presence in the metaverse.  Make no mistake, this is going to be huge and it will happen much faster than the dawn of websites, social media, and smartphones.

What Does This Mean for Economic Developers?

I predict most industries will find a use for the metaverse. Ultimately, I imagine it will be a lot like the internet has become, always there and available. There will be many benefits to communicating with a sense of presence and interactive visuals but the most attractive benefit will be the saving of time and money. Economic developers, being in the business of marketing communities with distinct geographies, must travel regularly to network with target industries and vice versa,  requiring significant travel from site selectors, business prospects, and talent to visit in person. These trips cost time and money, and the metaverse will allow for quick introductions to the communities and help qualify them to reduce the effort in finding the ideal locations. Being able to meet virtually, take a virtual tour, and communicate with leadership will be a huge advantage in prioritizing the most promising locations.

How Can EDOs Prepare Today?

Although there are many exciting things to come as the Metaverse is developed, the cool thing is that there are already many ways the metaverse can be used as part of the economic development toolkit. The organizations that utilize the technology today are going to be way ahead of the curve in the future both in content and comfort. From the content perspective, utilizing 360 videos to give a familiarization tour of a community, prospective site or business will feel more ‘real’ than a 3D model. These videos have been an early focus for us because of the availability of the technology and ease of distributing it. The immersive qualities of VR provide a real sense of presence, second only to being there in person. Even in the metaverse, this content will be important to showcase communities. We have many clients already utilizing their virtual tours at trade shows and with prospects today (See some examples HERE). The ability to add 3D buildings to the virtual site tours has also been popular for providing a vision for brownfield and greenfield sites that are often still overgrown or visually lacking. (See some examples here.) For existing facilities, we have been incorporating technologies like Matterport for capturing 3D models that prospects can use to walk through in VR or a laptop, accurate enough to measure dimensions inside.

The PlaceVR Meetings app is quite literally an early version of a metaverse that can be used today. Utilizing VR headsets, an economic developer can invite prospects to a meeting room, meet with them at a conference table and then take them on the 360 video tours of their community and sites ‘in person’.

There are many organizations using this technology today. In Shelby Kentucky, immersive videos are being used for introducing students to career opportunities with the leading employers in the region. In Montgomery County, Ohio they are using familiarization tours and site tours to attract international companies. Oregon Trail Electric Cooperative has used the same technology to engage communities in the region and provide training to first responders.

This Is Going To Be Exciting

Golden Shovel Agency will continue to keep a close eye on the developments of the metaverse. I intend for us to continue prospecting the new technologies and developing where necessary in areas that will most benefit the economic development industry. I want to see this new paradigm unfold in ways that make our jobs easier and more productive. The coming metaverse momentum only solidifies the vision sparked from the cardboard headsets back on the lake. If I have anything to say about it, it’s going to be incredible. 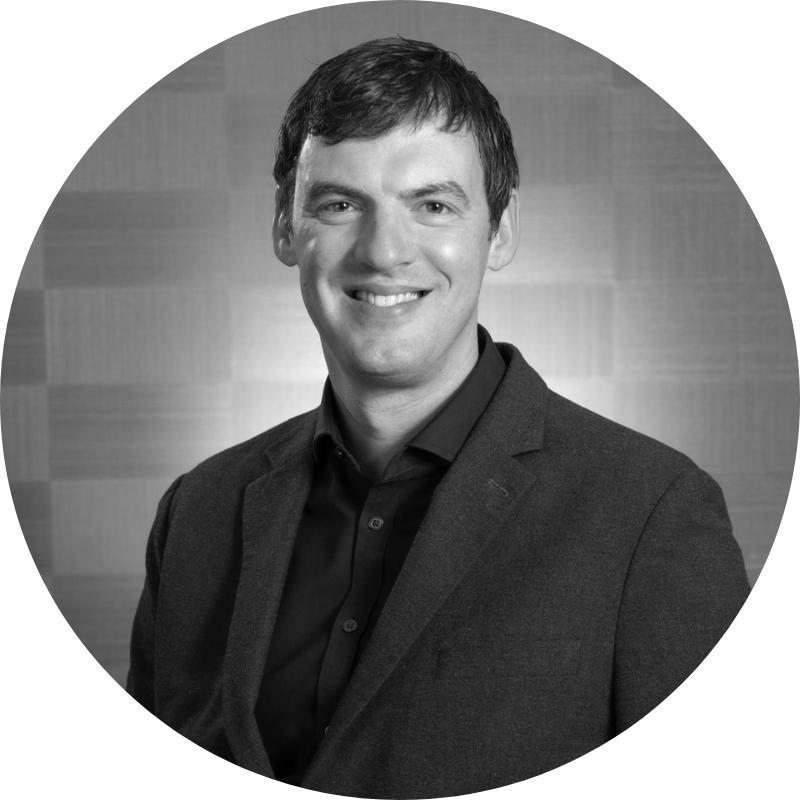 Aaron Brossoit is the CEO of Golden Shovel Agency and PlaceVR. He is creative at heart with a passion for exploring the boundaries where technology and design meet. As an entrepreneur, he sees business as an extraordinary vehicle for sharing new ideas with the world. He finds great satisfaction working in the economic development field, where connecting people and businesses with the communities they thrive in leaves a lasting and meaningful impact for people living there. 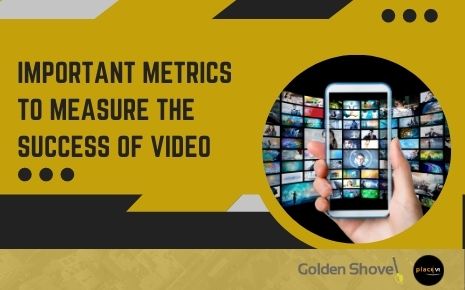 Important Metrics to Measure the Success of Video

Jan 17 2022
VR Tours are popular because they’re effective. In fact, they’ve become such a common factor in decision-making that a lot of economic development organizations consider them a “must-have” component in their marketing arsenal. After all, everyone starts by doing research online before they pick up the phone. A compelling V...Continue Reading 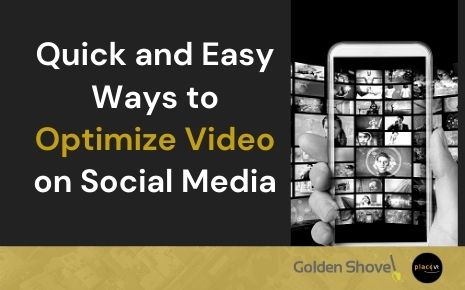 Quick and Easy Ways to Optimize Video on Social Media

Jan 10 2022
You should be optimizing your video on social media because you already invested in quality video. You know it’s the most effective medium for telling your story. Not only is it compelling, it’s also an easy experience for your audience to engage with. Now it’s time to optimize video t...Continue Reading 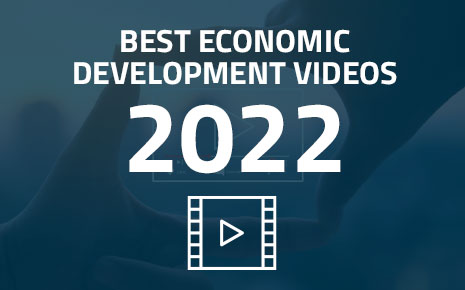